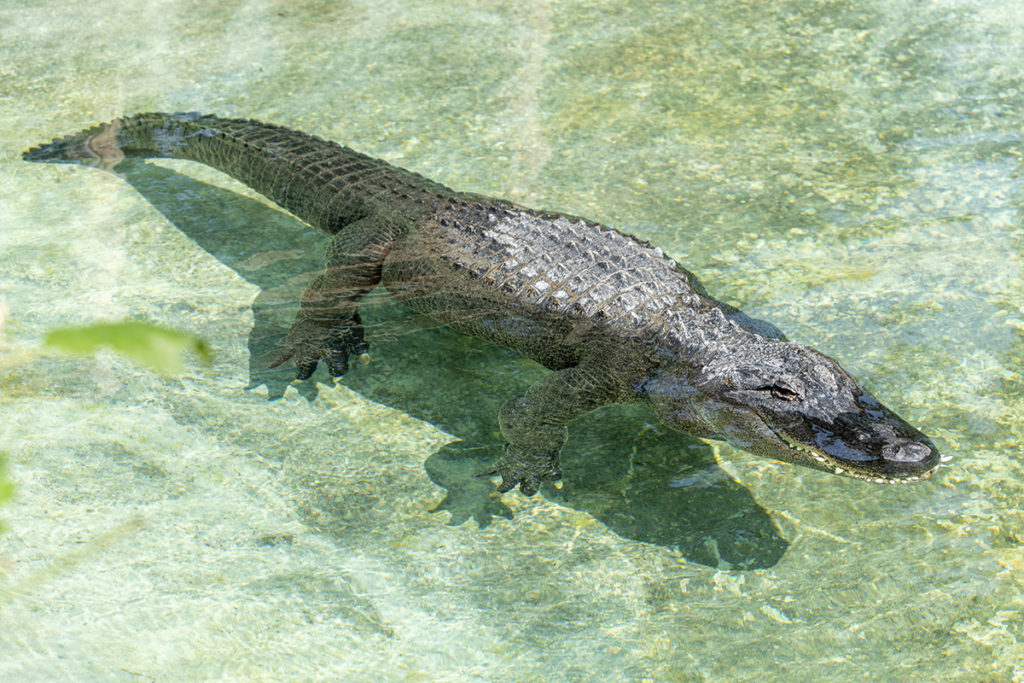 Lifespan: up to 50 years

Diet: Wild: Young alligators feed primarily on insects and freshwater shrimp. As they get older, they will begin to eat frogs, snakes, and fish. Mature adults mainly eat fish but will also feed on waterfowl and small mammals.

Habitat: American alligators are found in the southeastern United States inhabiting Florida, Georgia, Texas, Louisiana, and Alabama. They live in freshwaters of warm wetlands and swamps.

Description: American alligators have a lizard-like shape and armored skin. Their back is covered with thick, rectangular horny plates. A characteristic comb or crest of tall scales runs along their tail. Unlike other reptiles, alligators have an external ear formed by a fold of skin which can be closed over the eardrum. While its toes are webbed, alligators don’t paddle when in the water but rather swim in a serpentine style. Alligators can also float with only their nostrils, eyes, and ears above the water’s surface by properly distributing the air in their lungs. The alligator’s nostrils can be closed by a fold of skin. American alligators also possess a nictitating membrane which is a milky-colored third eyelid that they can close from the inner corner of their eye. Alligators are closely related to crocodiles, and the two are often confused. While the head shape tends to differ with alligators having broader and shorter heads and a blunt snout, you should also look at the teeth. A crocodile’s upper and lower teeth are in line and when its mouth is closed it has one tooth which is visible jutting out from its lower jaw. Alligators’ upper teeth, on the other hand, protrude over their lower teeth.

Alligator populations have been affected by hunting and the pet trade. While some people believe it is fashionable to have an alligator as a pet, they do not consider the ramifications of owning this reptile which can group to be quite large. After discovering they cannot care for the animal, alligator owners have either donated them to zoos, which have not been able to keep up with the requests, or simply dumped them somewhere. These discarded pets have led to many rumors of alligators living in sewers. Alligators have also been killed for their skin in order to make alligator skin purses and shoes. Early in the century, American alligators were close to extinction, but a conservation program established in the 1950s which banned hunting has saved the alligators. In fact, their populations have rebounded so well, that their numbers are now controlled by organized hunting.

In areas where the water levels fluctuate, an alligator will dig a hollow in the mud which will then fill with water. This hollow guarantees the alligator a source of water as well as providing water for other animals in the area. American alligators are typically solitary animals.

Our Animals: Smiley, Alan, and Agouti