The zoo also unveiled an 18-foot bronze statue of a female giraffe and calf by artist and sculptor Jocelyn Russell.

During the ribbon cutting ceremony, Josh Sisk, executive director of the Potawatomi Zoo, thanked everyone who was involved in making the zoo’s plan of bringing giraffes to South Bend a reality.

“I am so proud to have worked with the city, state, community, donors, and staff on this incredible project,” said Sisk. “It’s my hope that in 50 years, we can look back and see how this habitat was an integral part of the zoo’s revitalization, and another big step in turning our beloved city zoo into a regional destination.”

“This is yet another exciting milestone for our zoo, a place that continues to prove its impact and reach in remarkable ways,” said Perri.

Perri also read a letter sent by United States Senator Mike Braun that ended, “I am certain the Potawatomi Zoo and the Laidig Giraffe Conservation Center will faithfully serve and educate all Hoosier’s and American’s that have the pleasure to visit this beautiful center.”

The $6.3 million Big & Loud campaign included $4.8 million for the new giraffe barn, visitor center, and habitat and $1.5 million for renovations to a new lion habitat. In total, more than 300 individual donors contributed to the fundraising campaign. The Laidig Conservation Center is named in honor of the Laidig family, who contributed a $1.5 million lead gift to start the project.

“We are all here because we helped bring giraffes to South Bend in way or another,” said Anella. “We have been blown away by the community’s generosity and enthusiasm. It’s been clear that people really care about giraffes!”

The 10,000 square-foot Laidig Giraffe Conservation Center includes space to house other animals like zebras and ostriches, and an indoor visitor center, a unique feature for zoos with giraffes.

“One of my favorite parts of this project is the indoor viewing area,” said Sisk. “It was important to me that visitors would have the opportunity to see giraffes in all weather, all year long. And we wanted a chance to show people how we care for giraffes.”

The 2.5-acre outdoor habitat includes a waterfall water feature and an elevated viewing and feeding platform. The platform is covered by a circular canopy that mimics the look of an acacia tree, one of the favorite foods of giraffes.

The zoo’s four male Masai giraffes–Seymour, Maximus, Wyatt, and Kellan–arrived at the zoo in December 2021, and have been spending the zoo’s closed-season acclimating to their new keepers and routine. Seymour, Maximus, and Wyatt are five years old, and Kellan is two years old.

The giraffe mother and calf sculpture by Jocelyn Russell took a little more than a year to create from beginning sketches to the finished bronze casting. The sculpture was funded by a generous gift from one of the Big & Loud campaign donors and features a plaque that reads “Joyce Newton’s Dream,” as requested by the donor.

“I was intrigued by the challenge of sculpting a giraffe for the zoo,” said Russell. “I’ve been to Africa four times, and I’ve researched Masai giraffes in the wild. They are so beautiful and elegant, and it was a pleasure to work with the zoo to create something magnificent to stand at the entrance of this new habitat. 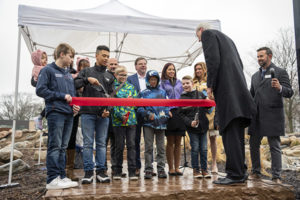 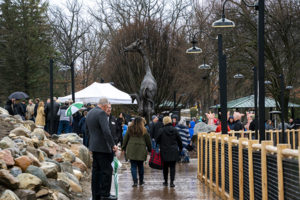 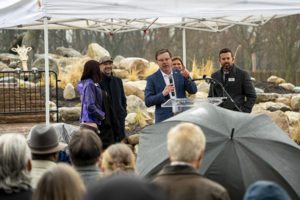