The Potawatomi Zoo is pleased to announce the arrival of a 2-year-old female Amur leopard named Anastasia.

Anastasia is the daughter of Jade, a female Amur leopard who was born at the Potawatomi Zoo in 2010 to mother Pearl and father Preston.

“Over the years, we’ve been proud to be part of the Amur leopard Species Survival Plan, and we’re so glad to start a new chapter with Anastasia,” says Josh Sisk, executive director of the Potawatomi Zoo. “I’m excited that people have this opportunity to get to know her and further appreciate this incredible species.”

Amur leopards are a critically endangered subspecies of leopard.  Originally native to an extensive territory encompassing the Primorye region of southeastern Russia, northern China around the Amur River, as well as the Korean peninsula, they now live only in a small part of the Russian Far East. Loss of habitat, poaching, and fragmentation of the population have led to a significant decline in the number of wild Amur leopards.

“There are fewer than 100 Amur leopards in the wild and only about 100 in zoos,” explains Sisk. “Each one is precious and critical to understanding this species and hopefully, someday, bringing them back from the brink of extinction.”

Anastasia will have indoor and outdoor access as she gets used to her new home, but the public should be able to see her when she chooses to be outside.

“Pearl had such a long and remarkable life here at the Zoo as a mother and ambassador for her species,” says Sisk. “There’s something really special about having her granddaughter living here now.”

Amur leopards are solitary by nature. Unlike African leopards, Amur leopards are adapted to temperate forests, cold climates, and mountainous areas. They have thicker, longer fur than other leopards and longer legs. They’re skilled at climbing and swimming, and can jump as high as 20 feet. In the wild, they prefer to hunt at night. 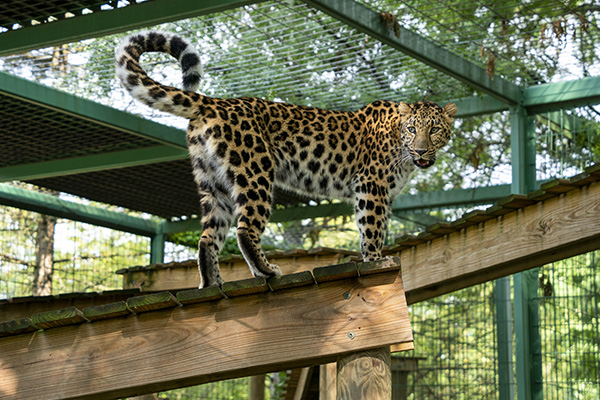