The Potawatomi Zoo is excited to announce the birth of two female red panda cubs, born on June 17, 2021, to mother Maiya, age 7, and father Justin, age 9.  This breeding was part of a recommendation by the Association of Zoos and Aquariums (AZA) Red Panda Species Survival Plan (SSP).

Zoo staff watched the first few hours of the cubs’ lives from closed-circuit cameras while first-time mother Maiya got used to caring for them. In order to give Maiya a quieter, less stressful space, the red panda habitat was blocked from public access, and Justin was moved to another area behind the scenes.

In the first twenty-four hours, Zoo staff weighed the cubs and determined that one was smaller than the other and seemed to have respiratory difficulty. After discussion with the Red Panda Species Survival Plan, the decision was made to remove the smaller cub to be hand-reared by animal care staff and leave the larger cub with Maiya. The goal is to eventually reintroduce the smaller cub to Maiya, once it has gained weight and seems to be strong enough.

Within the last three weeks, both cubs have gained weight and seem to be thriving. The Zoo is cautiously optimistic, although the mortality rate for red panda cubs is nearly 50% and even higher for hand-reared cubs.

Breeding season for red pandas is between January and March. They can have one to four offspring. In the wild, red pandas give birth in tree hollows. At the Zoo, Maiya’s nest box was adapted to be smaller to better fit this natural instinct.

Red panda cubs are born with their eyes and ears closed; they open within three weeks. At birth, red panda cubs are grey and wooly. Their reddish guard hairs start to appear after two weeks.

Red pandas are indigenous to a narrow geographical area stretching across the eastern Himalayas and southern China. Their physical structure, like their thick coat and furred feet, as well as their low metabolic rate, make them well-adapted to cool-weather environments. Red pandas are part of the order Carnivora due to their digestive system structure, although because of their natural environment, the species has adapted to largely consuming bamboo and shoots. 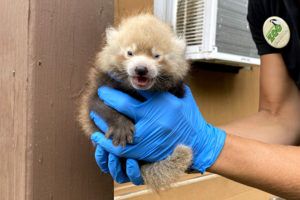 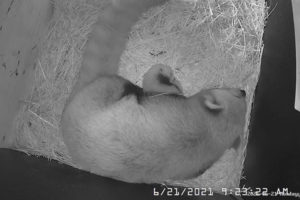 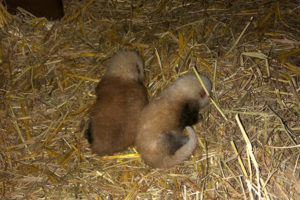