The Potawatomi Zoo is pleased to announce the births of several animals at the Zoo this summer.

Most recently, two Chacoan peccary peclets were born July 17 to mother Peppa and father Tapo. The young peccaries, whose sex is undetermined, can be seen in their habitat near the Picnic Grove.

“Chacoan peccaries are endangered in their native habitat, the Gran Chaco region of South America, so we’re very excited to be a part of this animal’s Species Survival Plan,” says Josh Sisk, executive director of the Potawatomi Zoo. “Very little is known about the way these animals breed and raise their young, so we have the opportunity to add to the knowledge base and hopefully help this species someday recover in the wild.”

This breeding was part of a recommendation by the Chacoan Peccary Species Survival Plan (SSP). An SSP is a cooperative program of Association of Zoos and Aquariums (AZA) institutions to responsibly breed animals for the greatest genetic diversity. The zoos that are part of the Chacoan Peccary SSP are working with conservation organizations in Paraguay to create a population that can be released back into the wild.

On July 13, the Zoo was thrilled to have its first flamingo chick in its history successfully hatch. The chick’s sex is still undetermined. The chick can be seen in the flamingo house with its parents, Pinky and Boyfriend. Both parents share feeding and nesting duty, so the chick is occasionally in the nest under one of its parents. It may begin to start venturing off the nest soon.

“Typically, flamingos need a flock of 20 or more individuals to successfully breed,” says Sisk. “Our flamingos are also part of a Species Survival Plan, so this is very exciting news for our Zoo.”

Tree shrews are an omnivorous species native to Southeast Asia. Their average gestation is 41-50 days and usually have 1-3 babies.

On May 9, the Zoo’s black tree monitors successfully hatched an offspring through a breeding recommendation from the Black Tree Monitor Species Survival Plan. The baby’s sex is undetermined.

“Not much is known about black tree monitor breeding habits, so having a breeding group at the Zoo allows us to learn more about the best practices for breeding and encouraging population growth,” says Sisk.

Black tree monitors are native to the Aru Islands near New Guinea. They are considered vulnerable in the wild.

The tree shrews and black tree monitor live in the Learning Center, which is closed to the public right now. 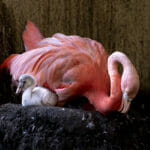 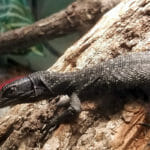 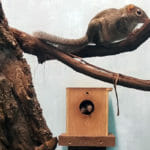