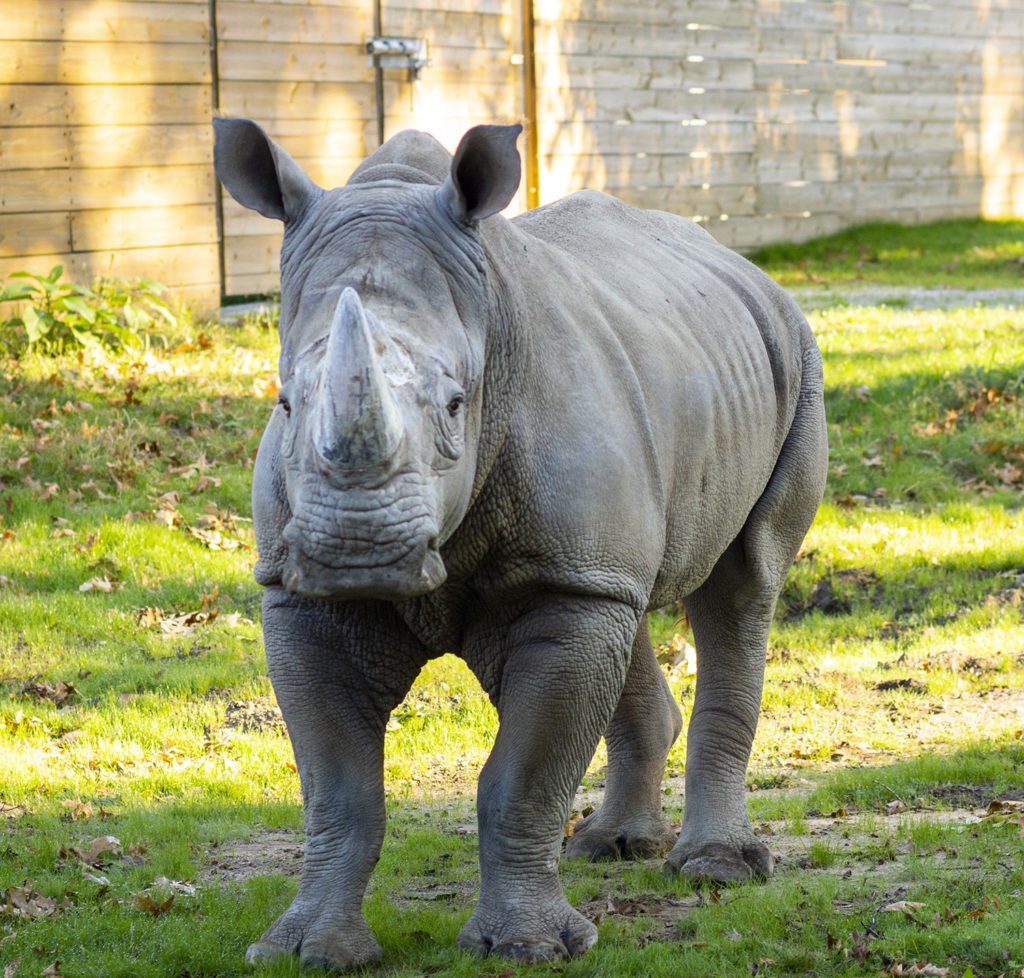 Horn Size: Southern white rhinos have two horns made of keratin, melanin, and calcium. The front horn is larger and averages 24″ in length, but can be up to 59″.

Diet: grasses and herbs in the wild

Description: There are 5 different species of rhinoceros: white rhinoceros and black rhinoceros from Africa, and Javan rhinoceros, Sumatran rhinoceros, and Indian (greater one-horned) rhinoceros from Asia. As grazers, rhinoceros are an important part of the grassland and forest ecosystems. By scraping the ground with their hooves, wallowing in mud, and trampling plants, rhinos are responsible for breaking-up soils and seed dispersal. This provides food and shelter to other animals living in the same habitat.

While there are several theories as to how the white rhino was named, none are historically well supported. Despite their names, white rhinos and black rhinos differ in lip shape, not color. White rhinoceros have square lips for grazing low to the ground, while black rhinoceros have pointed, rectangular lips for plucking leaves and fruits off trees.

Female southern white rhinos are social in the wild, often forming groups of up to 7 individuals, called a crash. Males, like the rhino at Potawatomi Zoo, are typically solitary and territorial, fighting other males with the use of their horns. Adult male territories span up to one square mile, which they defend vigorously with dung piles.

Female white rhinos may begin breeding after 4 years of age and males do not begin breeding until after 10 years of age. Typically, there is a 2 – 3 year period between calf births. Their slow reproductive process is one factor that has hindered rhinoceros populations in the fight against poaching, urban and agricultural development, human conflict, invasive species, and climate change.

Accredited zoos have been instrumental in the preservation of rhino species through Species Survival Programs, cooperative breeding management of a species to ensure genetic diversity and long-term sustainability. Zoological facilities have also contributed to rhino research, educational outreach, funding reserves in Africa and Asia, and relocating rhinoceros to protected areas.