The Potawatomi Zoo is proud to announce the birth of a Linne’s two-toed sloth baby on May 9, 2022, to mother Lily and father Lola.

The baby has been checked by the Zoo’s veterinarian, Audrey Siegrist DVM. It weighs .64 kg and seems healthy. The sex of the cub is not yet known.

“We’re so thrilled about this baby, the first sloth birth at the Zoo in recent history,” says Josh Sisk, executive director of the Potawatomi Zoo. “It’s a significant birth for the sustainability of this species, and we look forward to all our visitors having the opportunity to watch this baby grow up.”

The baby lives with its parents in the Learning Center and is visible to the public. The baby spends most of its time sleeping right now, but visitors may be able to see it being held by its mother.

The Zoo has two female Linne’s two-toed sloths, Lily and her daughter, Tofu. Lily and Tofu moved to the Zoo in March 2021. Lola, the father of the newborn baby, has lived at the Zoo since August 2017, and has no other offspring.

Veterinary staff were able to confirm Lily’s pregnancy with an ultrasound and track the baby’s development during gestation.

Linne’s two-toed sloths, also known as southern two-toed sloths or Linnaeus’s two-toed sloth, are native to South America, around the Amazon River basin. They get their name from the two long toes on their front feet that help them navigate trees and vines in the rainforest. In the wild, sloths are nocturnal and arboreal. They’re considered least concern for extinction, although their native habitat is threatened by deforestation and human incursion. 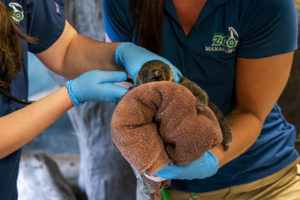 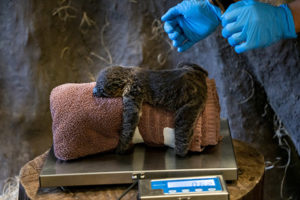 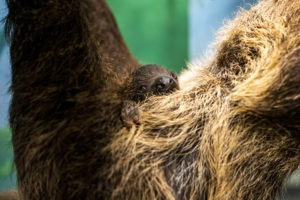